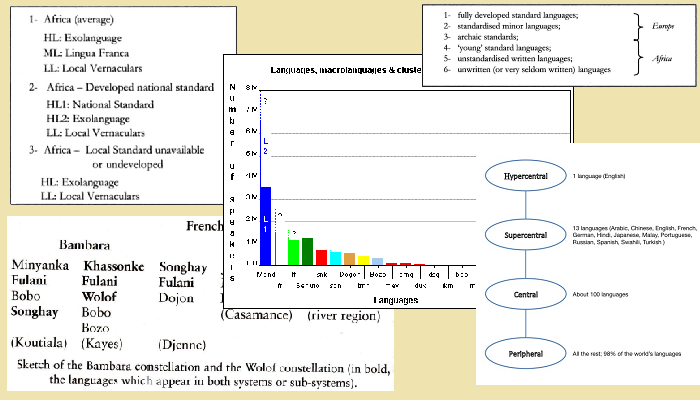 In a pair of posts on the Beyond Niamey blog, I looked first at the experience of multilingual messaging as part of response to the ebola epidemic in West Africa (this in a way different than my summing up post last December on LinkedIn). And then I stepped back to look at ways of conceptualizing West African multilingualism that might facilitate planning for more effective extension and public education in multiple languages.

Although the ebola epidemic is out of the news cycle now, it is still important to draw lessons from the experience. Various analyses have been done on the overall crisis, and by specific organizations on their activities. Few of these, however, have touched on the issues of delivering services, educating the public, and gathering data across multiple languages (the first post includes a section on how language is/is not dealt with in reports).

Why is that? Perhaps it is a combination of one official Europhone language being spoken by government and health officials, and understood by people with some level of formal education, and an unfamiliar (for foreign health and disaster response workers) and complicated linguistic situation beyond.

With this thought in mind, I began by trying “to disagaggregate as much as possible several interrelated aspects of the process of responding to a crisis like ebola in a multilingual context.” This is the first time I’ve tried this approach – basically recognizing that cross-language work is not just one thing. It happens in time (changing), in space (different in different places in an affected country), on several levels (international, national, local), through different “modes” (translation, interpretation, creation), and via various media (print, TV, radio, internet, mobile). It responds, ideally, to the linguistic demography – a factor closely related to “space” above. And it reflects organizational policies and priorities, for better or worse.

Then I tried looking at how the organizations involved – especially the international ones – could come to a better understanding of the nature of multilingual societies. In other words, most outsiders would understand that what they’re encountering is not an official language plus a bunch of “tribal dialects” (I didn’t see the latter term in this context, but have in others), but they also don’t have a way to quickly understand the linguistic complexity behind the basic statistic of number of languages spoken.

There are several models that can help put this complexity in alternative arrangements: hierarchical (in its worst form, a judgement of sophistication, but in a practical sense, how do the languages compare in terms of resources, speakers, or other criteria); constellation (a variation on hierarchy, but with languages in context of systems of use – this model is widely cited); long-tail (depiction of the number of speakers of languages at any level, which is always asymptotic, but often with different languages at the head of the distribution as one scales up or down), and language repertoires (what languages are used to what extent and have what level of standardization – a way of quickly profiling the major languages of a country).

I tend to look at such alternatives as different “frames” or perspectives for understanding a linguistic situation. Each has a value, and used together they can give a fuller understanding than any one alone can.

In any event, the purpose of trying to push the analysis in these ways is to help get as much learning as possible about the linguistic dimension of the response to the ebola epidemic, both in terms of specifics, and in terms of general approaches. Should there be another such emergency in a similarly multilingual region, being able to get leadership and organizations up to speed quickly on the languages necessary for effective messaging to a diverse population could be critical.