In a post last year entitled “Reframing ‘renewable energy’ & ‘bioenergy’” I introduced several diagrams, including a simple Venn depiction of how various forms of bioenergy are found in the overlap of “renewables” and what is burned or combusted to release energy. I’ve made a few minor changes to that diagram (detailed at the end of this post), and present the updated version below. 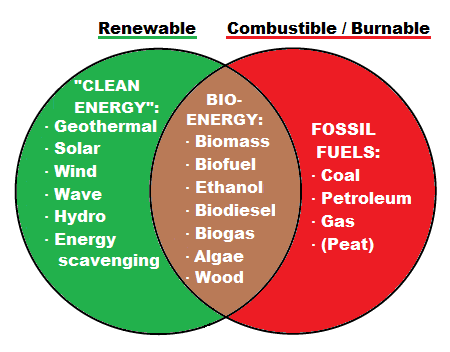 As I contended in my post last year, “renewable energy” is a problematic concept in that it is kind of a catch-all for several forms of non-fossil fuels, and definitions of it vary. A particular problem is the common opposition of “renewable” and “fossil,” which obscures the “double life” of bioenergy sources (both “renewable” in most definitions, and burned or combusted like fossil fuels but unlike other renewables, dubbed here “clean energy”).

The two operant categories at this level of analysis would then be “renewable” and “burnable/combustible” (the latter recognizing that some bioenergy forms like wood are burned with minimal processing, while others such as biofuels are processed for combustion). These are simply and appropriately representable in a Venn diagram.

Ideally this diagram, or a more professional image conveying the same information, can help encourage more clarity in reports on or discussions of energy sources. In particular, it is important to move beyond the simple opposition between “renewable” and “fossil,” and to be more specific at all times about the kind(s) of renewable energy being referred to.

In my post last year I explored other ways of categorizing energy sources, including without use of the “renewable” or “combustible/burnable” categories. One of several aspects I hope to return to is the inclusion of another relatively minor subcategory of forms of bioenergy that are not burned.

An academic article published by Atte Harjanne and Janne M. Korhonen in Energy Policy this past April – “Abandoning the concept of renewable energy” – looks at how “renewable” is used and potentially misused, and suggests that an alternative framework for categorizing forms of energy could inform better policy. I hope to return to this as well.

This space is complex, contested, and vitally important for understanding and dealing with the energy and environmental challenges ahead.

The original Venn diagram had “Pure renewables” as the heading above geothermal, solar, etc., which I changed to “Clean energy” pursuant to a discussion on Twitter with some nuclear energy proponents.

I deliberately treated nuclear as its own category: Non-C like “clean”; but uses feedstock requiring extraction & there are waste issues. Not forgotten. pic.twitter.com/H36vPEWNwz

I added the header “Bioenergy” to the brown overlap, to make clear that this represents a group separate from “Clean energy.”

Also in the interests of clarity, I underlined the titles of the two circles, “Renewable” and “Combustible / Burnable” in colors corresponding to the circles they represent.

Finally, I added “peat” to the list of fossil fuels, but in parentheses. From what I read, categorization of peat in this regard is not clear.