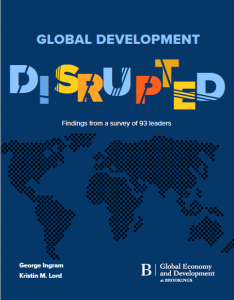 A report published recently by the Brookings Institution entitled “Global development disrupted: Findings from a survey of 93 leaders” (by George Ingram and Kristin M. Lord, March 2019) “reveals a global development sector in transition and perhaps even turmoil.” This post will look at how the report uses three specific terms – culture, language, and localization – and draw some inferences from those.

This is obviously a high-level report, but I approached it with an eye to some issues identified from years working on or close to the grassroots level – issues that I see as key underpinnings to successful work in support of development at all levels.

Philosophically, I also see “development” as fundamentally a process of “unfolding” and “revealing of potentialities” (its core meaning, related to its etymology),1 which the material and learning foci of development programs and projects ideally facilitate.

Over the years that I’ve moved in and out of international development work I have, of course, been cognizant of changes in the field. These changes, which are part of the background for Brookings’ report, include, among others: changing funding equations; new technologies; evolving socio-economic contexts; different actors on both the international level and within the countries where work is done; and a nexus of security issues and responses.

There are also constants in the field, of course. beyond the general mission.

In addition, there are deeper questions about what international development is and could or should be. The three terms that I key in on here – culture, language, and localization – could be doors to considering those.

My early years in development practice and study were during the period when the field both recognized the “cultural dimension of development,”2 and almost simultaneously critiqued that concept with the idea that maybe culture is so integral to development that it can’t be separated out.3

However it seems strange – even allowing for the fact this is a high-level analysis – that the cultures of the places where international development works are relegated to two (of 16) mentions – an observation concerning how “cultural issues” may limit host country government attention to gender issues, and the following general statement:

Expatriate experts lack the depth of understanding of the local culture and how it works. Better solutions will be offered by local actors.

The latter seems to imply that the whole topic of culture outside of the organizations (reduced to “local”4) is taken care of, having been filed under another term and theme in the report, “localization” (which theme is discussed below). If it’s simply that “better solutions” are local, then what is the role of the expatriate there anyway? Shepherding funds and filing reports?

While it is certainly true that someone from a “local” culture generally has greater depth in it than an outsider ever will,  it is also true that someone from outside any culture (whether that be ethnic, national, organizational) can see things and ask questions that those who know it best might not see or ask. Think forests, trees, and cross-cultural complementarity.

Could it be that the “best solutions” in development come from local actors interacting with expatriate development experts who, for their part, have developed more than a passing familiarity with the cultures of the places in which they work?

In fact, the field offices, at least, of development organizations generally include expats who have some level – sometimes considerable – of cultural knowledge about the places they are assigned to. And at some level the development organizations value this. Yet this important factor, and how it might be enhanced, doesn’t emerge in this document.

International development has become ever more of a business, and a very large one at that, such that a significant part of its attention is now necessarily devoted to its own functioning. And that includes, as reflected in the report, the culture or cultures of donor and development organizations – and how that works or how those interact. Judging by the preoccupations of leaders of development organizations, it seems the center of gravity, as pertains to the spectrum of cultures of all parties involved in development programs, has thus shifted away from focus on the cultures of the “beneficiaries”5 of those programs.

What is lost when the original “cultural dimension” of development is effectively relegated to the margins of the business of international development?

The high water mark of discussion about the “cultural dimension” of development stopped short of encompassing its “linguistic dimension.”  This was an opportunity missed. In the context of the focus on organizational and professional cultures reflected in the “Global development disrupted” report, one gets the impression that language has receded even further from active consideration as a key factor in development.

The document includes a single mention of “language,” and that is in “natural language processing” (NLP), which appears in a list of technologies6 about which development leaders “express broad excitement.”

I’ve had a long interest in language and technology, and certainly believe that NLP could have potential in development – especially to the extent it can be used in first languages of beneficiaries. It’s not clear that development leaders are thinking in this direction, but the fact that languages get no other mention reflects what I’ve come to see as the usual disconnect between development (theory, practice) and language (as a factor fundamental to communication, learning, and indeed culture, in development).

I touched on this gap in an earlier posting on this blog – “Visualizing language, development, education & ICT connections” – in which the language↔development connections are portrayed as “largely ignored.” 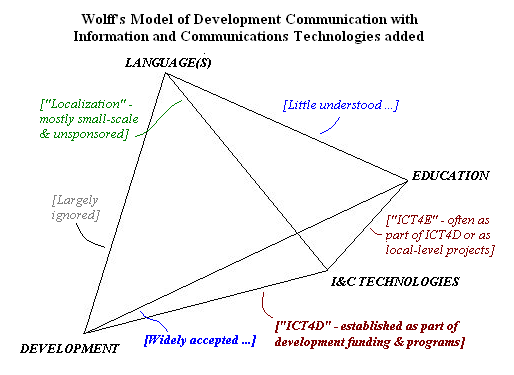 The language↔ICT (information and communication technology) links mentioned in that post are also relatively undeveloped in places receiving international development interventions. If this assertion is accurate, one could assume that interest in NLP is not thought of in multilingual applications.

It is important to remember that development organizations function in a limited number of globally dominant languages, and in some cases “local” languages of certain wealthy countries, while many development interventions happen in places where an entirely different set of languages, and often many languages in a given location, are widely if not predominately used. This linguistic juxtaposition should be at least as apparent as the cultural one. And because it involves relative neglect of the less “powerful” languages, it has important implications for the outcomes of development interventions.

However, this “linguistic dimension” is absent from the concerns expressed through this report. In that respect, unfortunately, international development doesn’t seem to have changed that much at all.

“Localization” has a number of meanings across different contexts (from medicine to geography). Over the years I’ve used it mainly in connection with translating software and content (per “L10n,” and in this context basically the same as the language↔ICT connections mentioned above).

“Global development disrupted” uses this term frequently (16 times), but always in a different sense: that of shifting responsibilities and initiative closer to the beneficiaries. i.e., national and local institutions and leaders. This is a logical and positive direction in which to move, but not a new idea.7 It is interesting, however, to note the prominence of this concept in the responses by development leaders.

What does the emphasis on localization in this sense mean ultimately? That’s an interesting question that gives rise to others:

The report itself offers useful insights into the thinking of those in high positions in development organizations. The content of that thought, however, along with what I see as a persistent gap, has helped give new form to an evolving set of impressions I have about the current state of the field of international development.

The way “culture” is discussed implies a subtle but fundamental change in preoccupations. The way “language” is not discussed reflects a constancy in priorities (specifically what’s not there). And the way “localization” is treated points to an ongoing shift, potentially major, in terms of the structure of the field (e.g., who the actors will be, where the initiative resides).

In general, the report confirms a sense that a large part of what originally attracted me to this field – being outside a corporate structure and focusing on efforts and processes that assisted people and their communities – exists less than it may ever have. (The old format of the donor agency having bureaucratic approach

In general, the report confirms a sense that the field has become:

Where is international development headed? Part of the answer would be in the localization piece. Another part probably in factors not directly related to the field as we have known it.

1. “Development” in this field is usually defined in terms of economic growth and improvement of standards of living. These are of obvious importance to materially less well-off communities. And they are measurable via quantifiable metrics, which is important to donors.

2. For those unfamiliar with this topic, the first two (free) pages of this article give an intro:  Pierre Pascallon and Clermont-Ferrand. 1986. “The Cultural Dimension of Development.” Intereconomics 21(1):38–45. A longer treatment, with focus on environmental knowledge is offered in: D. Michael Warren, L. Jan Slikkerveer, David Brokensha, and Wim H.J.C. Dechering, eds. 1995. The Cultural Dimension of Development. IT Studies in Indigenous Knowledge and Development.

3. My first encounter with the notion of a centrality of culture in the development process was a statement in a 1981 interview of then former Algerian president Ahmed Ben Bella that the problems of development are first of all cultural problems (Jeune Afrique #1072, 22 July 1981). That view never intersected, as far as I’m aware, with academic discussions of the period about culture and development, but it could have.

4. I find the use of “local” to be tricky. On the one hand, it is a normal descriptive, but on the other hand it may imply a minimization of the “other.” I’ve noted this particularly in the are of languages, per “local language.” One way to disarm that impression is to couple it with something broader, like “national” or “regional.” That way you acknowledge the range of cultural contexts.

5. “Beneficiary” is the term long used in international development for people its interventions are intended to help in one or another way. Its use is also criticized as implying a passive or inferior status. See for example Wayan Vota’s “Please Stop Using the Term ‘Beneficiaries’ in ICT4D” (2013) and Pete Vowles’ “Why I Hate The Word ‘Beneficiaries.’ But I don’t know what to replace it with” (2018). I use the term here without endorsing it.

6. That this list was generated by a question on “the most exciting new initiatives or new directions in their own organization or international development more generally” – in other words blurring any distinction between those presumably intended more for an organization’s operation, and those more directly affecting beneficiaries – is itself telling.

7. When I first joined the Peace Corps almost four decades ago, an early take on this was the slogan, “working yourself out of a job.” Over the years, greater emphasis in development has been given to partnering with local organizations. All that seems to have resulted in changes in types of jobs on the international side.

One thought on “Change & continuity in global Development”