There’s lots of speculation these days about how robots and artificial intelligence (AI)* might further transform the way we work or drive a new industrial age – along the way maybe even taking our jobs – but not so much on how such advanced technology could change the ways recruiters fill positions and almost nothing how it might help people find employment. In an age where self-driving cars are already on the road, aren’t we due for some breakthroughs in the mechanisms recruiters and job hunters use in the job market?

Maybe you’ve read about the novella “co-written” by AI that fared well in recent a Japanese literature competition? Or other projects using AI to write reports or stories – or even “better emails“? If I’m writing a resume, I’d want something along these lines to fill in all the right details and keywords to the right measure, and optimize it just right for the recruiter’s database search and eventual 6 or 8 (or maybe 30 on a slow day) seconds of attention.

But wait – if I’m a recruiter I might want something along the lines of that Alphago program that beat human champions at the complex game of “go” to analyze candidates’ skills and track record and figure out which ones fit best in which positions, seeing ahead a few moves to future development and retention. So maybe even award-winning resumes won’t be seen by humans?

But then, since we’re talking about AI, maybe the resume writing program and and the recruitment strategy program could somehow just talk to each other? Have them get back to us when they have something!

Getting real … in the age of AI

It’s hard not to speculate about what AI might be able to do to make both the job search and the recruitment process less labor intensive, more efficient, and more productive for all.

In recent years there has been a lot of discussion of how technology trends will affect job hunting and recruitment – for example 6 or 7 ways in 2012, 5 ways in 2013, reiterated in 2014, 10 more in 2014, 4 or 5 or 10 ways in 2015. However, all of these really concern changes in, not of, the system, and don’t venture into how cutting edge technology could transform the job market. Yet.

AI actually does come up in a few discussions of technology for recruitment – for example as early as 2008 and in a later undated article –  but more as sophisticated ways of searching resume databases and beyond. A recent article tacks on chat bots and employee onboarding to the tasks AI might do for recruiters, so you can see the direction things are moving in.

There’s not even that much for job seekers, who are for the moment still stuck essentially with late 20th century tools and processes. A recent innovation for job boards claims to use AI to help job hunters find positions. Again an intimation of where things might go, but again not changing the search process, let alone the vehicles used to apply – such as hand-typed resumes.

A system on the verge of transformation?

Could we be on the cusp of a revolution in the job market involving AI, data science, and perhaps virtual reality that could aid both the person looking for employment and the company doing hiring? One that would enable a lot of the time-consuming processes involved in searching and application on the one hand, and review and screening on the other to be done more quickly and systematically, with less human error, and on a wider scale than is possible with current methods?

This is not to suggest that the whole hiring process should or could be completed without human input, but rather that many of the initial (often repetitive) tasks on both sides could be more efficiently and productively handled by intelligent automation – processes that ultimately will be able to interact. And that that human input would then come in where it is most valuable, and indeed essential: input of information and parameters at the outset, and at key decision points later on.

If self-driving cars can provide personal transportation that is potentially safer and more efficient, couldn’t there be analogous advances in how jobs are found and filled?

On the job seeker side, consider how much time goes into searching listings, filling out applications, crafting resumes, writing cover letters, and maintaining a professional social media presence. And along the way keeping up with all the advice and evolving thinking on approaches and techniques to do all of that better, which has become an industry in itself (looking for a job? here’s a list of 9 more books you should read, according to Business Insider).

Altogether this represents a lot of repetitive work, most of which has no return (one recent article on “1200 job rejections” illustrates the problem). What if much of this could be automated, intelligently? Could AI, informed and tasked by a person, search out particular kinds of openings (roles, companies, locations), write and tailor presentation of professional information, and generate job applications? As a learning (recursive) program it would be designed to adapt, but a key aspect would have to be iteration and course correction with the person it is representing.

On the recruiter side, consider how many applications are received for each position, with the numbers growing each year. Incoming applications have to be processed in limited time, or stored in an applicant tracking system (ATS) and accessed as data (think keyword searches of masses of resumes). And then there’s screening and checking references. What if incoming applications could be analyzed and queried, with preliminary background and reference checks as appropriate, to yield a short list? What if the ATS was smart enough to do all that?

Then there is the question of how AI in the service of job seekers and AI in the service of recruiters would work together. One would imagine the need for a system of protocols and a conceptualization of the virtual space in which they would interact, as intelligent agents (IAs) in a multi-agent system. That could in turn lead to radical changes not only in how jobs are found and filled – for one thing, IAs operating quickly and across cyberspace could find matches that people could not – but perhaps also in the ways careers and staffing are approached. One could be permanently on the market in the sense that the IA could regularly check new employment opportunities or potential new hires.

And perhaps lead also to novel outcomes as IAs go to work: What if for example, IAs of job seekers who have never met could compare notes about an organization or salary offers, or IAs of recruiters could share data on a particular candidate? 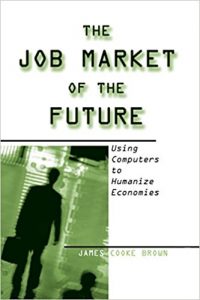 The idea of technology fundamentally changing the ways people find employment and organizations find employees – as opposed to enhancing or modifying parts of the current system – is not new. Perhaps the most extensive effort to think through the possibilities is that of James Cooke Brown in his 2001 book, The Job Market of the Future: Using Computers to Humanize Economies. But while Dr. Brown’s work considers how to reorder the economy and thus the nature of employment, aided by computer technology, I’m wondering if the sequence will actually be reversed. That is, that application of advanced information technologies – specifically AI – in the service of individual employers and especially individual potential employees might in turn change the nature of those relationships and how careers are built.

The job market as we know it is basically an evolution of communication between people needing paid work and people needing help with getting something done. And the current system of web-based applications and screening of digital resumes is the contemporary version of a set of tools, roles, and modes of communication developed in recent history as economies became more complex: job ads; employment agencies and websites; applications with resumes and cover letters; recruitment/hiring as a specialization within the field of human resource management; and processes of review and selection.

Will intelligent technology rewrite this sequence and the elements involved? I’m suggesting it will, and that it will be a good thing. In the following posts in this series, I’ll explore aspects of this question:

* AI can refer to a range of capabilities and processes. For a basic introduction, see the articles in Encyclopaedia Britannica and/or Wikipedia. In referring to AI in this blog post, I am assuming some variable sub-set of that range.