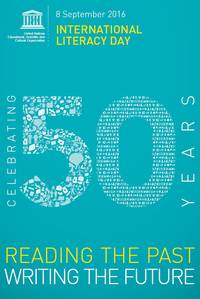 There are two days devoted to literacy: International Literacy Day, today, 8 September 2016 (poster on right); and Indigenous Literacy Day, which was celebrated in Australia yesterday.

International Literacy Day has been observed for a half-century, with UNESCO taking the lead by, among other things, choosing a theme (this year’s is “Reading the Past, Writing the Future”) and sponsoring major events (this year over two days at its headquarters in Paris).

Indigenous Literacy Day is more recent, and organized by the Australian NGO, Indigenous Literacy Foundation. It is a “fundraising and advocacy day” on which the organization and partners “spread the word about improving literacy levels and opportunities for Indigenous children living in some of the most remote and isolated parts of our country.”

Both have important roles, though in contexts where some languages are minoritized, the question can be posed about which languages – whose languages – are prioritized. A tweet raised just that issue regarding Indigenous Literacy Day:

Every mention of Indigenous Literacy Day is implicitly about English literacy. Drives me bonkers.

Another question is what are compelling criteria for setting up such separate observances for literacy, rather than concentrating efforts on the main international observance. This is not to say everyone (group, organization) has to so limit themselves, but rather that it is a good to ask what the separate observance brings to specific targeted linguistic and cultural demographics on the one hand, and global efforts to expand literacy on the other.

In the run up to International Literacy Day, the two annual literacy prizes were announced (on 31 August; the awards are given on 8 September):

The King Sejong Literacy Prize was awarded to:

The UNESCO Confucius Prize for Literacy was awarded to: