Northbound on US Interstate 75 near the Ohio-Michigan border last week, I came to a stretch of highway where road repairs necessitated closing all but the right lane. Cars in front began finding openings in the already slowing lane to my right, and all of a sudden I found myself alone with an empty lane stretching perhaps a half a mile ahead. “Uh-oh, they don’t do zipper merges here.”

The problem of merging traffic

Many years back, I observed that when two backed up lanes of traffic are merging into one lane, it is always the merged-into lane that moves the slowest, not the lane that is ending up ahead. One might expect the opposite: that the line of cars in the lane that is ending would move more slowly as drivers try to move into the active lane of traffic. But what in fact is happening is that everyone in the ending lane is trying to merge early at different points in the active lane. And that seeming politeness or prescience actually helps slow the whole process down for everyone.

Car traffic is a system – a fairly linear system, so not too complicated in how it works. However it has properties beyond what the individual driver in its midst can see, and which are unknown to him/her. For example, in heavy but moving highway traffic, if one driver slows by stepping on the brakes, all the drivers following will also have to touch their brakes at that same location for a period of time – even though the reason for the first driver tapping their brakes has long since passed. One name for this is a “traffic wave” (a simple interactive model online shows how it works). I witnessed that phenomenon from an office building overlooking US Interstate 5 one early evening in late 1978. Once you see traffic movement from well outside the driver’s point of view, driving it is not the same.

I never really thought more about merge dynamics until having to deal daily with one particular highway merge – where Virginia State Route 267 eastbound joins US Interstate 66 – on a commute home in late 2010 and early 2011. The heavy traffic would always be backed up more or less as the two lanes from the 267 spur fed into 66, and the rightmost of those lanes ended.

Of course the same phenomenon mentioned above reproduced regularly, with the merge-into lane – the left one in this case – moving slowly and people trying to pull their vehicles into it at the first opportunity. Except, that is, for a few cars zipping along down the empty right lane and merging up ahead.

Knowing this particular road, I tended to “precrastinate” and be in the left lane well before the merge dynamic began. Then I noticed that if I let someone in early, I might also have to let someone in later on. And there were other dynamics one observed, like the driver ahead letting everyone in in front of him/her. Or in the right lane someone fully stopped well before their lane ended, with their blinker on and a tail of stopped traffic behind them.

I ultimately adopted the tactic of letting no one merge in front of me until the right lane ended (by managing distance, one reduces the perceived opportunity to merge), and then always letting someone in at the merge-point. It was later on that I learned this late merge dynamic has been dubbed the “zipper merge.”

Turns out that in heavy traffic, zipper merging – cars using both (or all) lanes and alternating where one lane ends – can “reduce traffic backups by as much as 40 percent.”

In the US, waiting your turn in line is part of the culture. Cut in a line of people waiting to get to or through something, and folks disapprove, grumble, and maybe publicly mutter their opinion of your action or character. This social norm is functional in many situations such as ticket windows and cafeteria lines.

Highway traffic is different because you can’t do a U-turn to go back to your proper place at the end of the line and wait your turn (imagine the traffic consequences). So drivers tend to want to do the next best thing, which is to merge into the line in the first opportunity. At least that’s better than trying to cut in at the head of the line, right?

For their part, the drivers in the merge-into lane accommodate early merges – after all that seems reasonable and they’ve been on the other side too.

So what you end up with is the dysfunction I observed already years ago: the merge-into lane moving more slowly, and the merge from lane mostly empty except for cars slowing down to merge a soon as they can. And the occasional vehicle zooming down the merge-from lane and out of sight. 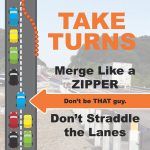 That dysfunction is heightened to the degree that early mergers feel offended by the seeming impoliteness of late mergers (for example, see discussions from 2016 & 2017), and compelled to enforce denial (blocking at the merge point or straddling lanes). This was the potential scenario I had to consider on I-75 the other day, having already passed a lot of early mergers already.

Some of the online content about zipper merging plays off the dominant notion that it seems rude:

Apparently efforts to re-educate drivers on this point are having mixed success, at least in the US. My impression is that zipper merging is gaining some traction in the Washington, DC area, but it clearly was not used on the road to Detroit. (A 2016 Business Insider article highlights the experience in Missouri, Kansas, Washington, and Minnesota). From a cursory look at info on other countries, it’s not clear that people in general take that readily to the concept.

Aside from public education, improved signage (either promoting zipper merge or simply not indicating which lane will be closed until later), there are even some efforts to educate children (future drivers). It may take a while to change prevailing attitudes, but it might help to frame the issue in terms of traffic as a system, with dynamics you can best understand by stepping outside of your role as a driver (incidentally the kind of perspective that would inform programming of self-driving vehicles). In the meantime, unfortunately, one can’t expect that trying to use the more efficient zipper merge will necessarily be met with approval.

So on that stretch of I-75, I ultimately played it safe and found a gap in which to semi-early merge. Then one other vehicle sped past to the merge point – and I may have been the only one who didn’t mind.