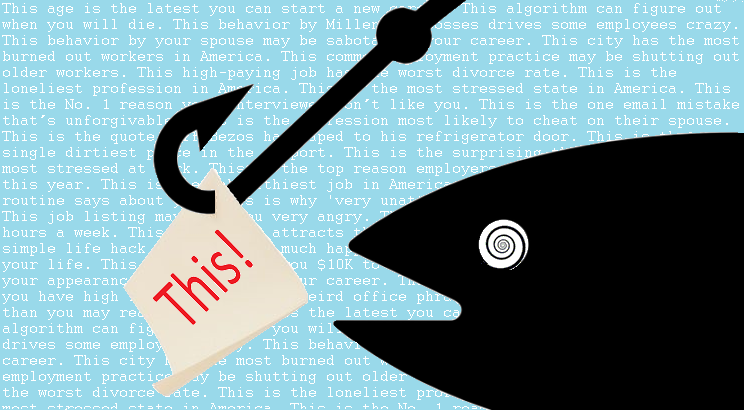 It may not rise to the level of “torture,” but it sure is annoying – the constant resort to a “dangling this” in hyperlinks intended to entice readers to click on them. What comes to mind, especially after observing its use, is the water drip torture – often referred to as “Chinese water torture” or “Spanish water torture” – which consists of a steady drip of water on the forehead.

Clickbait can be a little more low-key, or it can be more raw – “weird trick” “jaws dropped” “you won’t believe what happened next” …. If you’ve surfed the web even a little, you’ve probably seen it all. A lot of clickbait just assaults your curiosity.

The “dangling this,” on the other hand, is a kind of shortcut – a crutch word in the web content world, perhaps, or maybe the poor man’s clickbait. But once you notice it, dangling-this clickbait becomes quite irksome, and arguably more insidious in its approach to enticement than the frontal attack of most other clickbait.

“Some clickbait headlines leave out a key element to lure in the reader.”¹

Poor man’s clickbait gives you just part of what might be some legitimately useful information. Rather than try to lead you on through choice of wording (clickbait has a lingo of its own), the tactic is to deliberately omit a central piece of information, which is most easily replaced with a “this…”

Devolution of headline writing under clickocracy

Attention as measured by views, and views as generated by clicks, mean money. So a lot of talent, resources, and effort are put in to getting and keeping people “engaged” in web content. And that has given rise to a whole new set of ways of inciting curiosity.

In a way, clickbait is a descendant of old-fashioned newspaper headline writing. but with some some variations. The headings for articles are composed with a particular style due to space limitations (especially in print) and a desire to catch the reader’s interest. But they invariably give the reader a whole idea of what the story is about. Or at least it used to be that way.

“Headlines need to be accurate, first, and to fairly reflect the theme of the story.”²

Dangling-this clickbait deliberately departs from that practice, and sometimes it’s as simple as a swapping out:

Worth noting that (re)writing the heading this way is not done to economize space. It’s just a cheap way of getting the reader to open the link to fill in the blank (“which state is that?”).

One newsletter’s many “dangling this’s”

I’ve been subscribed to Ladders‘ newsletter mailings for quite some time – they sometimes have some interesting content – but late last year I began noticing an increasingly clickbaity tone of the newsletter headlines featured in its emails, many of which used the dangling this. Rather than unsubscribing, I left all their emails on my server beginning in January to see if there were a pattern. I’ve extracted all the clickbaitesque uses of “this” in titles over the 5+ ensuing months in the following list (which is sorted alphabetically).³ There are over 40 instances, not counting repeat use, making approximately 2 dangling-this headings per week (drip, drip, …). The list illustrates the extent to which one organization – certainly not the only one⁴ – is relying on poor man’s clickbait to present its content via email and on its website.

The solution to dangling-this clickbait?

Personally, I try never to click on clickbaity headlines – I didn’t open any of the above links for example – so as not to encourage their use. In the rare case the topic seems interesting, one can do a quick websearch to find a link with a more complete and informative title. Treat your clicks as a votes of approval for the approach used.

2. “Writing headlines for print” (Based on a lecture by Ross Collins, professor of communication, North Dakota State University)

3. This list was simple to generate: Searched for The Ladders newsletters in Gmail; copied over the list, screen by screen, to one file in my go-to text editor (EmEditor); then, since items in the text were tab delineated, copied all that and plopped it into Excel; then sorted and manually deleted batches of rows to isolate the group of titles; then copied the list back into EmEditor to manually delete extraneous text; then copied it over here and bulletized.

4. Surprisingly, even the respected Smithsonian Magazine resorted to dangling-this clickbait for an article about the town of Liberal in rural southwest Kansas: “This Town In Kansas Has Its Own Unique Accent.”

The item that prompted me to begin writing about “Why are we doing this?” (WAWDT) was a news report about the US Federal Communications Commission (FCC) decision to rescind authorization for 9 internet providers to provide subsidized broadband to low income households under the Lifeline program (CNN; The Hill; Gizmodo). This is not the biggest issue out there, but in the torrent of news, it was in a way one item too many.

The details are a bit complicated, but the immediate effect seems to run contrary to the new FCC commissioner Ajit Pai‘s stated desire to end the digital divide. The Lifeline program (FCC general & consumer pages) began in 1985 as a way of assuring telephone access to people otherwise unable to access essential communications services (such as poor and elderly). Internet broadband was added to the Lifeline program in March 2016, in recognition of the increasingly essential nature of broadband – such as for students who need good internet access for their schoolwork.

The 9 companies that had been granted this status so far (out of a total of 117 applicants listed on the FCC’s Lifeline Broadband Provider Petitions & Public Comment Periods page, accessed 4 Feb. 2017) have had their status downgraded to pending. They are, in the order they appeared on the list:

The timeline and final outcome are uncertain. According to the Washington Post,

Expansion of the Lifeline program to include broadband seemed a positive way to address one aspect of increasing inequality – access to information via the internet. Its ending or curtailment would certainly be a loss. Hopefully this can be reinstated or otherwise moved forward again in a way that benefits eligible people.

The FCC has at least one other potential WAWDT item on its policy agenda – overturning net neutrality as a governing principle of the internet.