Two items posted to LinkedIn, the first relating to forests not being suited as a primary source of future energy, and the second to desalination as a central piece in the future of water.

A couple of days ago, FAO Forestry on Twitter trundled out its problematic graphic from International Forestry Day 2017. So here I trundle out my [annotated] version of it, with commentary, along with link to a blog post from the same year calling for an end to industrial scale burning of wood for energy. https://lnkd.in/eucnxYf 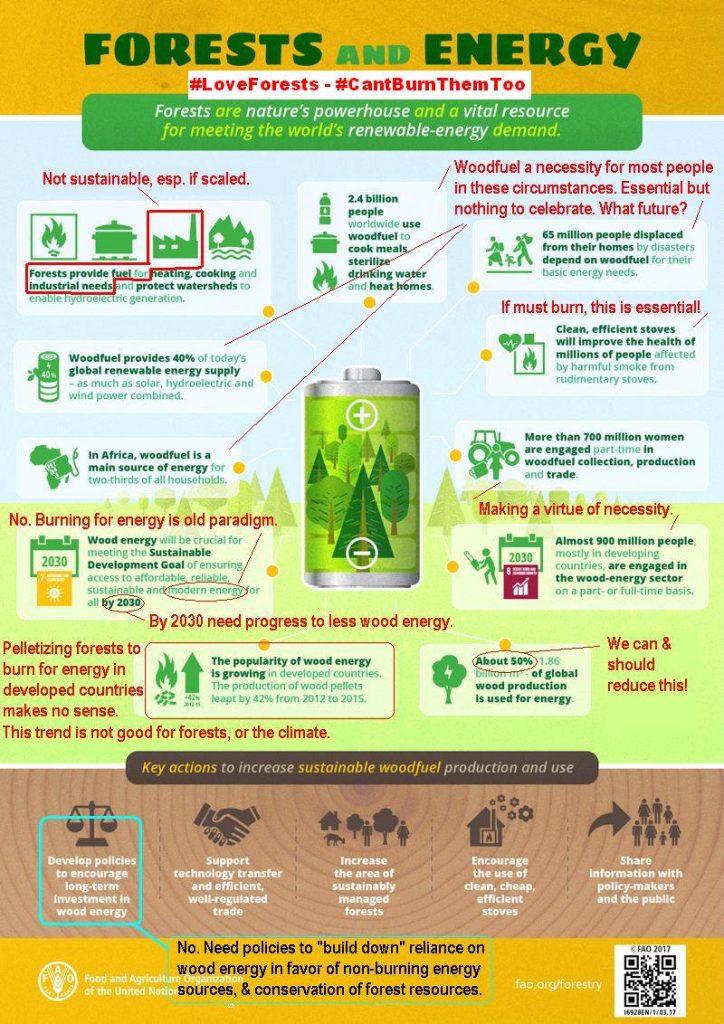 The issue of wood energy is more nuanced at smaller scales, but at larger scales – where it is rationalized by what many consider to be sketchy carbon accounting – its inefficiency & environmental costs seem to make an overwhelming case against some of what FAO proposes in its graphic. Moreover, I find it questionable to link the use of fuelwood by people in poorer countries (a necessity for many but even then has health costs) with industrial scale use, as if it’s all one happy spectrum of wood burning.

In fact, burning biomass for energy as part of “renewable energy,” must decrease as we move to 2030 & beyond. It would be great if FAO would help lead the way in this vision. We need forests for so much, and the pressure on them is incredible. We can’t expect to burn them too.

Repost, with comments, of a post by Stockholm International Water Institute about an article entitled “Desalination: a life saver in desperate situations,” 1 February 2019 (posted February 2019)

There are no panaceas, but maybe #desalination really should be approached as a key element in the future of water. We do need to better manage limited existing freshwater resources, but it’s clear that that alone won’t be enough. Nor will it open new possibilities we’ll need in a dramatically changing world environment.

1. Desalination is not cheap. But measured against other things we spend (waste?) vast resources on, it is certainly affordable. The main issue is policy priorities. And what if we made ambitious “moonshot” goals for improving the technology?

2. Concerning energy requirements of turning seawater into fresh water, alternative energy technology coming online may reduce reliance on fossil & other burned fuels. Estimates that a small area of the Sahara devoted to solar energy could theoretically supply the whole world’s needs gives you an idea of the potential.

What could desalination enable us to do that we can’t do now?