As part of a larger inquiry about the nature of the world of “work,” I previously (mis)used the Venn diagram that has been “memed” as an expression of “ikigai” to raise some questions and speculations. That diagram (two modified versions with set notation are in header) proposed that as individuals we can find our ikigai, or purpose, at the intersection of what we Like to do, what we’re Good at, what the world Needs, and what we can be Paid for. Here I want to zero in on the intersection of the first three. In set (builder) notation that is L∩G∩N (in the diagrams above, the regions colored red).

When, in my previous post on ikigai, I considered those circles as representing all possible motivations/rewards people find in diverse kinds of work, the L∩G∩N intersection seemed particularly interesting. This is where – in theory at least – people Like what they’re doing, they’re Good at it, and the world (or some significant part of it) Needs this work. However, they are not Paid to do it (so technically I think this is (L∩G∩N)\P). A few of the popular ikigai iterations assign characteristics to this region such as “Happy, but poor” and “Delight and fullness, but no wealth,” but surely there’s more to it, especially as you aggregate the experience of many people.

What is going on in L∩G∩N, what kinds of work are people doing, who is doing it, what is its value to the society, and why is it not remunerated? And what does all this mean as we anticipate the impact of intelligent automation on the “future of work”?

Unpaid work activities that might be in the L∩G∩N area are quite diverse, and may be in a home, in a physical community, in a virtual community, or in a professional area. Some examples (although not everything under these headings will necessarily be L∩G∩N):

Again, to be clear, although all the above may be in L∩G∩N, not all people involved in each of the above will necessarily love the work and be good at it, even if the work is needed.

Other unpaid work activities related to one or more of the above that might not be in L∩G∩N:

Who is doing work in L∩G∩N?

The question of who works in L∩G∩N “mode” (in roles such as those listed above) is a subset of the larger question of who volunteers or does unpaid work. In the diagrams above, this would be all the areas outside P, and not just L∩G∩N.

On a macro level, the US Bureau of Labor Statistics in 2015 answered part of that larger question with an estimate that about a quarter of the population engages in “volunteer” activities (though the exact percentage varies year-to-year). People who volunteer have motivation, obviously, the activity generally addresses a need, and their skill levels may vary. It would be very instructive to have a characterization of motivations for the diverse kinds of tasks listed above. A distinguishing feature of volunteering is that at some level at least, volunteers have the means to afford to devote time to an unpaid work activity outside the home and paid work.

Other kinds of unpaid work include, notably, work within the household (the last four in the list above). This ideally, if not always in practice, would fall in L∩G∩N (within extended families, grandparents would often contribute with an L∩G∩N mix of love, competence, and experience addressing needs). There is an important gender dimension here – it is well documented that women do more unpaid work at home than do men, which when added to paid work, means that in much of the world, et least, women are overall working more than men.

(Before continuing, note should be made of the darker sides of unpaid work, which by nature are outside of L∩G∩N. For example, shadow work, which essentially puts what used to be paid work onto the consumer [per self-service], which alternatively means that one pays for certain goods and services with a combination of money and work, but without the latter being explicit. One might consider forced labor and slavery as being at the extreme end of unpaid work, but since they are coerced, I’d argue that these are another, separate category.)

It turns out that the broad area of unpaid work and volunteering has had some significant attention from governments and academia. Of course this is much less than the amount of research and publication on various forms of paid work (jobs, employment, including self-employment), but it does help us understand the scope of unpaid work. Among this body of work, I will reference only one here.

In an article entitled “Extending conceptual boundaries: Work, voluntary work and employment,” Rebecca F. Taylor distinguished among formal, informal/public, and informal/private or domestic, each of which may be paid or unpaid (I discussed these categories briefly in a May 2018 LinkedIn post). 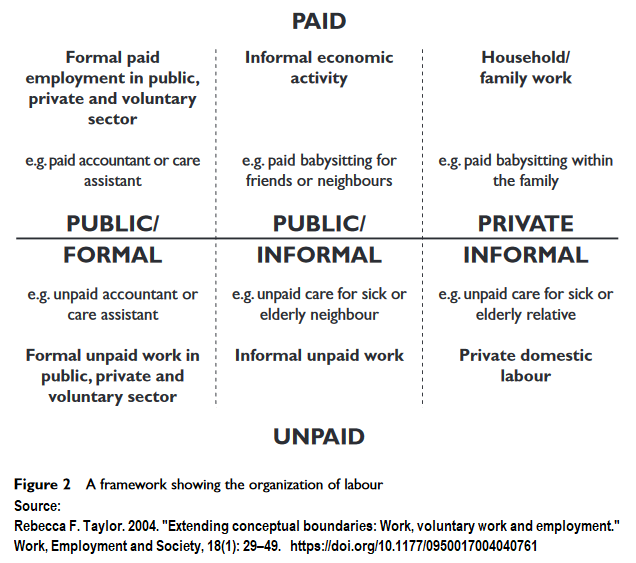 In fact, both paid and unpaid work (here including volunteering under the latter) are more multifaceted than one might think at first. Paid work is thought of primarily as jobs or employment (public/formal, paid, in Prof. Taylor’s schema), but also includes a range of short-term, intermittent, piece-work, and gig arrangements (public/informal), as well as informal paid work within a family. Unpaid work seems to be considered only in specific contexts – such as a focus on work within the household (private), or the role of volunteering in a community (public), but rarely across the range of observable activities.

When looking at unpaid work and focusing on the presence of skills, motivation, and meeting needs (L∩G∩N), I would argue, it is important to bring those disparate elements into a single frame of analysis.

Why is L∩G∩N work unpaid?

The boundary between what is paid and unpaid – or in terms of the focus of this article, between L∩G∩N∩P (labeled ikigai) and L∩G∩N – may seem a bit arbitrary. If work in the latter is needed, and the people who do it bring motivation and skills, then why isn’t it remunerated? That’s a question asked to understand why, and not to hint at a particular solution.

It is probably related to why it is possible for two people to do the same job, but be paid differently for it (the gender dimension of this phenomenon rightfully is getting more attention, as are racial and ethnic bias, but it is a larger problem – see an earlier note on LinkedIn re salary negotiations). And also, uncomfortably, to how it is even possible for two people to do the same work, with one of them being paid and the other doing it voluntarily.

What we are really talking about is what activities in our economy are paid for (P), and what are not. The very form of the diagram(s) used to portray ikigai, which I am continuing to (mis)use as a way of considering aspects of work, suggests a mismatch or at least different purposes and orientations. (The diagram isn’t so useful in discussing levels or degrees within each circle.) Economics would of course tell us that this is all the logic of the market, but is that a satisfactory answer?

In any event the range of activities one would find in L∩G∩N seems vitally important to the functioning of the socio-economy. Should we be treating this special class of work differently? And what might that imply for the rest of the changing economy as we look to the future?