For various work that involves recordings in one language and text in another, there is a shortcut for which there is no name. Three postings on LinkedIn relating to that and the lack of attention to transcription.

There are two ways of transferring the meaning of focus group discussions or interview responses in one language into written/text form in another language. Clear terminology to distinguish between them would be useful.

In law, as in qualitative research, 2 (unnamed) ways to get from spoken language A to written lang. B not the same: (image posted 7 October 2017) 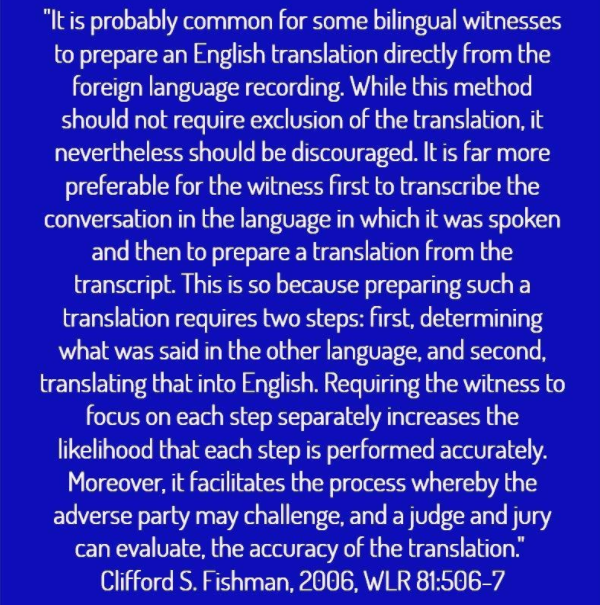 These two approaches merit specific terms that can be used across disciplines to describe the processes and products, facilitate reporting and critiques, and help in methods courses. Could translation studies fill this gap? (Have they already?) Otherwise folks like me will try coining terms…

Source for the quote in image: Washington Law Review https://digital.law.washington.edu/dspace-law/bitstream/handle/1773.1/272/81washlrev473.pdf?sequence=1

(my response to reply in which transcribe, then translate was recommended)

Thanks Suzanne. Agree that’s the “best practice.” I got onto this question when we had a bunch of what were called “transcripts,” most of which were actually the kind of translation/interpretation done directly (without original language transcript). At that point I realized we didn’t have a simple way of referring to the latter other than “translations,” a term that masked an important aspect of how they were done.

A very imprecise analogy would be two-stroke and four-stroke motors. The two-stroke motor combines steps with the slight advantages of mechanical simplicity and power but disadvantage of burning dirty. The best overall is the four-stroke (for as long as we still use internal combustion!).

This space needs mapping out (or so it seems looking at it from “outside”). In the context of forensic communication, for example, Luciano Romito identifies 6 types of transcription: memory-based; notes (lecture, interview, conference); ordinary (either complete or partial); phonetic; forensic; and “disputed utterances.” https://tinyurl.com/yc22oshq

If you were to stretch the map to cover forms of interpretation, translation, and transliteration, and of course do that across disciplines, you could have a topography across which to identify key areas of current activity, overlooked sequences, areas for cross-disciplinary sharing, and processes/methods needing to be distinguished in terminology…