In a sense, the job market is really a market in resumes, even though a real person – someone seeking a job, a potential employee – is behind each one. Resumes stock databases, they are digitally searched, they may be passed around and printed and looked over. The distribution of resumes engages intermediary organizations, and advice about how to write and share resumes has become an economic activity. And of course, each resume itself represents an investment of time and resources.

Reign of the resume 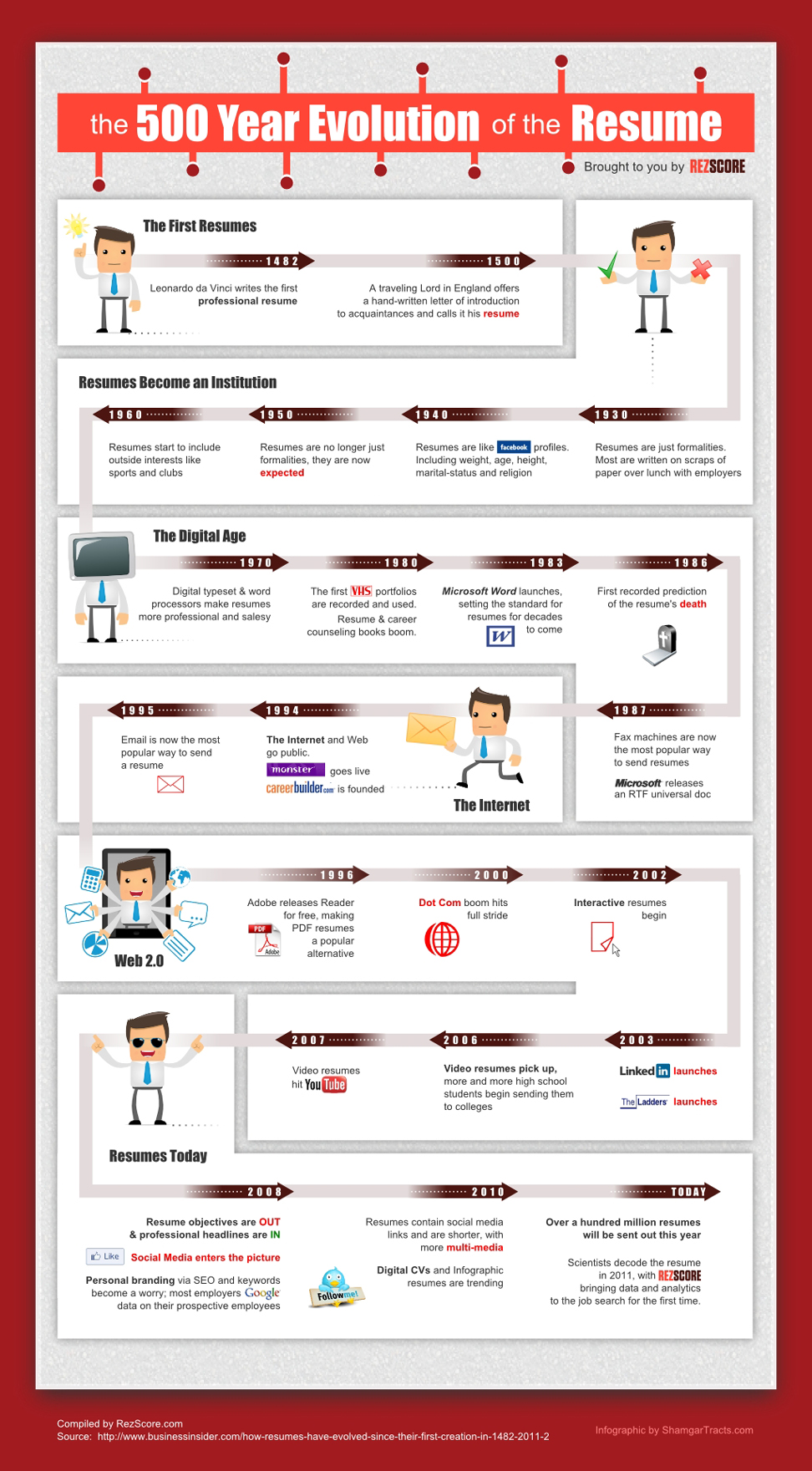 The resume, as a statement of one’s experience and education, and nowadays often cast as a marketing tool, is perhaps the central element in the current employment system. While some want to trace the history of the resume back to Leonardo da Vinci (see the diagram at right1), it really only became an established part of job applications well into the industrial age. Despite some changes in standard content over the years (e.g., bio info no longer appropriate, the objective statement now “out of style“), and in availability of much better tools for producing  and disseminating resumes on the one hand and processing them on the other, the basic concept hasn’t changed at all.

The ability to submit resumes has always run into the problem of whether and how they will be read on the receiving end. I still recall a talk back in the late 1970s in which the speaker suggested a red ribbon as a device to make a resume stand out in the very physical pile of paper before a recruiter hiring for entry level positions. Current availability of advice and tools to improve the content and look of a resume are more sophisticated, but still reflect the same concerns. In place of artifices like a red ribbon, job seekers of all levels these days are advised (1) to layer keywords into their resume or CV (one site lists 155) in order to make them findable in the digital pile, and (2) on the chance the resume is seen by human eyes, to format the content for the few fleeting seconds of attention they may get. For more detail, read the 300-page manual on resume writing offered by The Ladders.

Another factor is the disparity between those fleeting seconds of attention, and the hours spent putting together, updating, and tailoring a resume. It naturally takes much longer to write something worthwhile than it does to read it, but it seems that resumes are no longer even read. One quick estimate is that time spent glancing over a resume may be only 0.0003% to 0.0014% of the time taken to prepare it.

Meanwhile, the same digital technologies that have facilitated producing and editing resumes on the one hand, and online job listings on the other, have fostered a kind of trade in resumes. It is possible to post a resume on a website where, if one is to believe the advertising, it will be “exposed” to hundreds of thousands of employers. ResumeRabbit.com, for instance, claims over 1.5 million (via reposting to 89 other sites). It will however be one of probably millions vying for attention.

Even on a more specialized level, the numbers are incredible: DevelopmentAid.org for example, offers a “CV broadcast” service reaching 30,205 organizations (as of April 2017 – the number varies). In short, the system is flooded with ever more resumes.

Where is all this going?

One could argue that the humble resume is in effect being asked to do much more than it was ever intended to do. No surprise therefore to see radical-sounding prognoses such as the “death”  of the resume (for example in 2013, the previously cited 2015 list, and of course Nelson Wang’s 2012 book, The Resume is Dead), perhaps along with its recent counterpart, the applicant tracking system (ATS) .

Discussions of the “death of the resume” propose alternatives such as bios, videos, graphics, or the amorphous online personal brand. One blog post by Charles Handler several years ago suggested that “various elements of a resume are being teased apart and presented in a different format that is based more on profiles and portfolios.” But all these tend to end up with resume-surrogates that still have to be created by job seekers, and then sorted through and processed by recruiters, who for their part resort to the assistance of specialized software.2

In fact, the resume was never “alive” to begin with, given that it is static information on a page(s). Social media presence may be more current, and other resume-surrogates may have their appeal (some of them are quite creative in what they can convey), but in the end, these are all passive presentations of information, regardless of how well-crafted they may be.

Hence one of the questions here: Could artificial intelligence (AI) bring the resume to life, able to interact with a human or machine reader, bring forth relevant information, learn from the interaction, and inform the owner of the resume?

There is arguably an inherent dysfunctionality to this system, of which resumes are central, as the volume of applicants and positions grows. In the massifying job market, more people can send applications – relatively more easily thanks to technology – to more organizations for more positions. So, hiring departments adapt with more automated ways to screen out digital documents and reduced time for eyes-on review. But even if job seekers  “load” their resumes with keywords to get through the automated screening, the software is also “raising the bar,” to screen in more sophisticated ways. An extreme outcome of this “keyword arms race” is the oft-cited case where one company screened 29,000 applications for a single engineering position with not one of them found qualified.

Suggestions per Nelson Wang and others that job seekers take unorthodox strategies – the new “red ribbon” – are only an advantage when a few are using them. How much does anyone stand out if everyone is standing out, and how can recruiters with limited time sort through the cacophony? There are human limits. Hence on the recruiter side, automation and discussion of “AI” to deal with applicant data – which in turn reduce the applicant, or actually their resume, to data.

This massification of the job market is exactly the kind of situation – large and increasing number of actors, large but varying numbers and types of openings, complex quantitative and qualitative data, and waste – where a more intelligent, if not interactive, program or automation could do much better for everyone.

As one moves up the scale to more specialized and executive positions that are relatively fewer in number and higher in pay, the dynamic changes in some respects. Recruiters, sometimes from executive search services (headhunters) or firms specializing in particular professional fields, may reach out to contact prospective hires. Personal contacts developed in earlier work, may prove useful as sources for information and/or references – and indeed important as many positions on higher levels are not advertised (this is another issue that I’ll come back to). But there are still many people chasing mid to higher level positions in the same job market, relying on basically the same methods and advice.

The job market is one of imperfect information – in several ways. A job seeker can’t know all available positions they qualify for, and even the best research on a potential employer goes only so far. Recruiters must judge candidates based only on resumes first (usually) and whatever other information comes in the application or via referrals, and they often – especially in some industries – are dealing with a subset of potential candidates they’ll never have the chance to consider.

So, another part of the system includes intermediary entities designed in one or another way to help link employers with job seekers in that uncertain environment:

All of the above (except for job agencies run by government or non-profits) are businesses, basically selling services to employers, job seekers, or sometimes both. Like any business, they seek to maximize income, minimize expenses, and provide services that attract (and in some cases, retain) customers.  Significant amounts of money and attention to diverse revenue streams (often from both recruiters and job seekers) are involved.

On the job seeker side, for instance, resume writing services run about $100, while job coaches cost clients hundreds or thousands of dollars, with one upper end service costing about $10k (and all of that without any guarantee of results). No figures on what recruiters pay for services in this subsector (in tandem with their in-house recruitment capabilities), but it likely is a lot.

So, we have a system that has grown in all respects, has costly inefficiencies, and is – along with all of us – in the midst of technological change including what we call AI. It is inevitable that some aspects of AI will be brought into the job market more fully, even as other aspects of AI are applied to automate various jobs. We already see the early stages of this, as mentioned in the previous post in this series. The next post will focus on AI, with particular attention to the less often considered subject of what it might do for the job search side of the system, and how it could change interaction between job seekers and recruiters.

1. Image source: Undercover Recruiter. Image credit: Rezscore.com. Click on image to open full size. (Note the 400-year gap in the “500 year evolution.”)
2. Since traditional resume-based approaches on the entry level may miss talent, some employers try to get away from the resume, even using social events or computer games to evaluate applicants. It is not entirely new to have such live-performance evaluations of candidates – the US Department of State has long used an observed role-playing exercise as part of the selection process for Foreign Service Officers.