Proso millet (Panicum miliaceum) is the fourth millet to be profiled in this series and the third most widely produced in the world. It may have originated in what is now northeastern China, but spread to other parts of Asia and to Europe in ancient times.

Proso is described on the sites of the Agricultural Marketing Research Center, Feedipedia, and ICRISAT. A blog on millets has a couple of photos of the plant.

Other English names include broom corn or broom corn millet, broomtail millet, and quite a few others according to US National Plant Germplasm System (though curiously their list does not include “proso”) and Wikipedia. Various color names are associated with this millet – red, brown, white – with “yellow proso” being the variety commonly sold for human consumption in the US (interestingly, the Chinese word for hulled proso millet, 黃米  huángmǐ, also refers to yellow color). According to one source, the term “edible millet” in the US refers to proso, and the term “common millet” is sometimes also applied, though that is problematic on several levels. The name “proso” comes from several Slavic languages (in the Cyrillic script it is просо).

Proso is the most adapted of the four main millets to northern climates, being the main millet cultivated in Russia and the US. Like other millets, it can be grown on poorer soils. Although pearl millet/bajri and foxtail millet/xiaomi  are produced more worldwide, proso is actually more important on the world import/export market.

Proso only relatively recently became important in the US – during the 19th century, foxtail millet was more widely cultivated (mainly for forage). And production has also increased in recent years – a 2003 crop profile noted a dramatic increase over the preceding decade. The main use of proso in the US is for birdseed, and to lesser degrees as forage and as a food for people.

In 1987, when I had just come back to the US after spending 7 out of the preceding 8 years overseas – and 6 ½ of those in West Africa where I got to know pearl millet as “millet” – I went to the local East Lansing Food Coop, near where I had moved in Michigan, and found a bulk “millet” for sale. Surprised, since I had never seen “millet” before in an American foodstore – but also noting that the grains were smaller than what I had seen in Africa, and yellow instead of a duller, almost gray color – I bought some to try. Nothing like what I remembered.

I later found out that this was in fact an entirely different species of millet, usually called proso. Fast forward almost three decades to suburban Washington, DC, and bulk proso millet is still sold as “millet” (or actually “hulled millet” since proso is one of those millets that need to be hulled) in organic foods stores (photos below from Whole Foods and MOM’s Organic Market in northern Virginia). 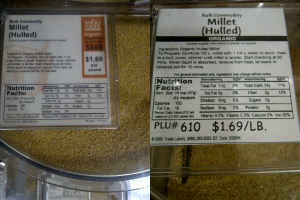 Proso millet is also sold in packages, but packaged products with “millet” in the list of ingredients are not necessarily proso millet. How to tell the difference will be one of the topics in the next post, “Four millets: More grains and the ‘millet spectrum.’”