Foxtail millet (Setaria italica) is the oldest cultivated millet, the most important in East Asia, and the second most cultivated worldwide. It is believed to have been domesticated first in China, with evidence of cultivation going back about 8700 years. The species name as well as some vernacular names reflect its historic significance in Europe.

Foxtail millet is described by FAO, USDA, Feedipedia, and on the ICRISAT site. A blog on millets has several photos.

Other English names include Italian millet, German millet, Hungarian millet, and dwarf or giant setaria. The Mandarin Chinese name for this grain is commonly said to be 小米 (xiǎomǐ), which literally means “little rice.” Chinese nomenclature for cultivated millets is actually quite complex, but xiaomi apparently refers to the hulled grain of foxtail millet (among the common names for this species and varieties of it are 谷子 gŭzǐ &  粟 sù). There are of course many names in the various languages spoken where foxtail millet is cultivated – one name from India that I’ve come across is thinnai or tenai. 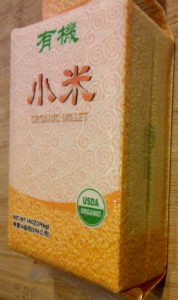 Xiaomi can be cooked in soup or porridge, or as one would cook rice. I find the taste milder than the previous two millets (bajri and ragi). There are glutinous varieties of this grain (seen in a market as 糯小米 nuò xiǎomǐ). Like rice, but unlike the bajri, ragi, or wheat, the grain needs to be hulled to cook – which is how it is sold, such as in the package shown on the left.

As a crop it has a wide range, cultivated across much of Asia and Europe, though as a minor crop in most of the latter. In the US it is mainly grown as animal feed and for birdseed. Interestingly, cultivation of foxtail millet in the central US increased dramatically after 1850 until it was the most widely cultivated millet in the country by the end of the century (the introduction of sudangrass as a forage crop led to a decline in cultivation of foxtail; no figures found on current foxtail vs. proso production in US).

Like other millets foxtail millet is tolerant of drought and can produce on poor soils in a short season (60-90 days for this one). On the other hand, some sources indicate its production does not benefit much from fertilizers or irrigation.

(Thanks to Jens Østergaard Petersen for his help with sources for Chinese names for millets. Needless to say, the interpretations above are mine.)

The next post in this series is “Four millets: 4. Proso millet.”