Finger millet (Eleusine coracana) is the second of the four millets to be described in this series of posts, and the fourth most produced among them worldwide. It is a native of the highlands of the Horn of Africa, but the main producer is India. In Africa it is grown mainly in a number of countries in the east and south.

Finger millet is described in Lost Crops of Africa, PROTA4U, Feedipedia, and the ICRISAT site. It seems to have the most interesting nutritional profile of the four millets, including a remarkably high calcium content. There is no shortage of articles online extolling its virtues – among them, one lists 6 reasons why it “rules” and another lists “10 health benefits.”

Other English names for finger millet include eleusine, caracan millet, koracan, and apparently also “pampered corn.” The color of the grain and its flour is reddish (compared to the grayish appearance of previously profiled pearl millet), so yet another name is red millet. It of course has names in the languages of regions where people cultivate it, and of these probably the most common is one used widely in South Asia, “ragi“: रागी (Hindi & Rajasthani); ರಾಗಿ (Kannada); ராகி (Tamil); రాగి (Telugu); راگی (Urdu). 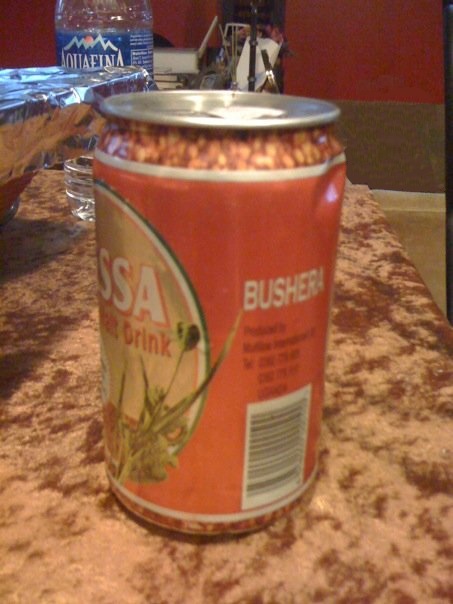 Although finger millet/ragi is apparently cultivated in parts of West Africa, I don’t recall ever seeing or eating it there. It was in Uganda that I first encountered it in the form of a non-alcoholic “millet” drink called “bushera” (a photo of a can of marketed locally is shown on left). It tasted a bit different than what I would have expected from the pearl millet I already knew (even allowing for some sorghum content in the beverage). There are also fermented beers – including an alcoholic version of bushera – made with this grain.

Unfortunately I did not have the chance to try any dishes prepared with finger millet from East Africa. One major use is in porridge (for two different takes on finger millet porridge with reference to Africa, see here & here).

Various sources indicate that production in Africa declined for many years in favor of crops like corn/maize, but that it is on the rise again with some help from projects (Worldwatch has a good overview, even if a bit dated, and an African Research Institute article gives a good case study from Zimbabwe).

An article in The Hindu mentions some uses of finger millet, focusing on India:

the ragi grain is malted and the grains are ground and consumed, mixed with milk, boiled water or yogurt. Also, the ragi flour is made into flatbreads, including thick, leavened dosa and thinner and even unleavened rotis. It can be ground and cooked into cakes, puddings or porridges, Or, the grain is even fermented and converted to a drink (or beer) in Nepal and in many parts of Africa.

The Pinterest site features a collection of recipes, many of which seem from a quick look to be from South Asia.

Ragi is cultivated notably in Karnataka, Kerela, Andhra Pradesh, and Tamilnadu provinces of India. Production levels have evidently been declining slowly over the last 20 years, but it is still a major crop. (A fact sheet on ragi culture may be of interest.)

Personal use in the U.S.

Not long after I found bajri flour in a local Indian food market, I decided to experiment with ragi from the same store – main object being something new to try for breakfasts (my responsibility on weekdays). As with bajri, I tried this with a breakfast oatmeal cooked with some ragi flour added. I found this grain has a relatively strong taste, almost tangy compared to the other millets. Also tried it with whole wheat in a bread, which worked out well, and tried a pre-made ragi crêpe mix, which was not as successful (probably user error). A ragi breakfast cereal was also interesting.

Ragi as a “super grain”?

Given its nutritional profile and unique taste, ragi seems to stand out among the millets, meriting the moniker “super grain.” (A web search will turn up a number of articles on ragi / finger millet as a super grain, as well as a number of others grouping millets together as one super grain.)

As a crop, ragi is drought hardy like many other millets, and is adapted to high altitudes and diverse climates. It requires much less soil nitrogen to produce, but evidently responds well to fertilizer (not a given with all crops). On the other hand, management and harvest are labor intensive. All together, however, one could imagine that ragi has an important future as a crop and food in regions like the US that do not yet know it well.

The next post in this series is “Four millets: 3. Foxtail millet, or xiaomi.”